Conflict Management
in Relationships Over 50

Effective conflict management in relationships depends both on the nature of the conflict and on how you experience conflict itself.


While your success at conflict management depends largely on whether you view conflict in relationships as good or bad, that depends on how you experience it in your mind-body system as well how you are able to handle conflict consciously.

Your intention needs to be to enter into working through the inevitable misunderstandings, disagreements, and oversights with acceptance and appreciation for each other. Once you can do that, conflict management in relationships becomes much easier.

Seeing relationships as moving through a series of relatively predictable stages can help a lot in this, though it does not in and of itself speak to how to go about it in positive ways.

This is really at the epicenter of the kinds of insight, acceptance, and keeping our eyes on what is important that can make all of our relationships in this last third or so of our lives more genuine and enjoyable.

However, the best of intentions are only as effective as your ability to manage the largely automatic systems in your brain that are constantly assessing danger and whose job it is to keep you safe. 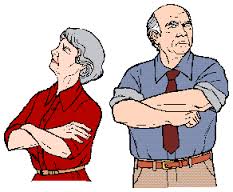 Faced with a win lose situation in relationships, most people will see themselves as having very limited options: get their own way or get out of the conflict; perhaps out of the relationship altogether.

The first choice, "winning" the conflict, leads to some pretty predictable and problematic actions such as:

Simply avoiding conflict may result in a stable, lasting relationship, but it tends to be on shaky ground

Or, one or both parties may decide to avoid the conflict by pulling back, staying out of the other person's way. It is rare, however, that this strategy doesn't eventually break down . . . usually sooner than later.

It is true that done long enough and skillfully enough, these people may settle into a peaceful life "together" running on two separate, parallel tracks, but it is not really a form of conflict management in relationships.

These are the ones who shock everyone when they divorce after many years. They were thought to have such a good marriage and, depending on your criteria, they may have. But, such a union is a fragile one, constantly at risk of being torn apart by one of the previously mentioned shocks or very often also by one or the other of finding some passion (or hope of it) from somewhere else and going after it.

The problem with either of these approaches, controlling or withdrawing, is that even if they do succeed, they are built on shaky ground. Sooner or later the whole thing is likely to come tumbling down.

If you conceive of conflict in relationships as a natural part of two people undertaking the building of a new entity as it were, a relationship, then it is no less difficult, but it takes on an entirely different meaning and has different criteria for judging it to be successful and conflict management becomes more possible.

In this view you are seeking two things.

Hopefully, when you have attained this deeper knowledge your new perspective thus achieved will reveal possibilities for moving ahead that neither of you could see before.

If you are really serious about doing this kind of thing and wanting to do something right now, you can get excellent value out of a course or webinar like Dr. Robert Huizenga's  "Turn Your Marriage Around In 48 Hours"

You can lick on the blue link below to get more information on what's involved.

﻿Turn Your Marriage Around in 48 Hours!.

I have referred people to Dr. Huizenga for a many years and find that his information and advice is well thought out and solid food for thought and encouragement for action.

You Can Learn To Make The Inevitable Conflicts That Occur in Relationships Work for You, Not Against You.

Conscious conflict management in relationships is the pathway of choice.

To stay on it on a consistent basis presents quite a challenge for most of us.

A consistent personal practice such as one of the many forms of meditation that acknowledges the presence and power of the automatic alarm systems that are built into your brain and nervous system in general can be a huge help too.  Some say that it is vital.

Often an agreement on a structure that will keep your power struggle stage of your relationship cycle on a positive, non-destructive footing is necessary.

Agreeing on a time and place to discuss emotionally hot issues can be helpful as can having agreements on who will talk, who will listen, when and what kinds of questions are useful.

Jock McKeen and Bennett Wong describe a particular approach to this that many people have found helpful in their book Joining: The Relationship Garden.

There are others that work well too.  Find one that you and your partner like and use it.

Some people find that a worksheet like the one linked to from the Power in Relationships section of this website, is a good start. Whether you use the worksheet or not, it probably will be helpful however you go at the discussion. (You'll find the link near the bottom of that page or you can go directly to it by clicking here.)

And the protocols described in books like "Difficult Conversations" by Douglas Stone, Bruce Patton, and Sheila Heen of the Harvard Negotiation Project as well as the general understanding of what you are trying to accomplish have been pivotal in the success of many couples in finding their own way to get the hot issues on the table in a form that leads to solutions.


You can have a relationship that feels better than being alone, but you have to find a healthy way to handle the inevitable conflicts that come with the territory.

The sooner you start building the right kinds of skills and habits to go at this for you, the better.